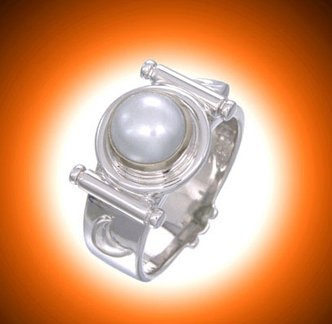 WHAT ARE REAL NATURAL PEARLS?

Today 99% of the people we see using pearls are actually using CULTURED- pearls. These cultured-pearls are considered to have little astrological (Moon) influence, if any, because the main body of the so-called pearl is NOT PEARL, but some pre-formed shell-ball implant. That means it is not a natural complete unit, but just a thin covering of real pearl substance (called nacre) on the surface of a pre-shaped and pre-sized non-pearl bead. A cultured-pearl contains only a small percentage of pearl, most of the body is NOT PEARL.

In ancient Oriental and European histories we know that the “Pearl” they referred to was 100% natural pearl, because cultured-pearls were not known until recently. But at the present time practically everyone (except a learned gemologist) now thinks that the hollow “cultured pearl” pearl-imitations are the real thing. This is mass ignorance, and should be addressed by all cultured persons who care about the true nature of things.

Natural pearls are 100% ‘pearl’ or nacre. It is thought that natural pearls form under a set of accidental conditions when a microscopic intruder or grain of sand enters an oyster (mollusk) and settles inside the shell. The oyster, being irritated by the intruder, secretes the pearl substance called nacre to cover the irritant. This process is repeated for many years, thus producing a real pearl which may (or may not) be found by man. For a natural pearl to form with a nice round or oval shape, and be free of any flaws, is actually a real-life “miracle.” The odds of a perfect natural pearl are 1 in a million. 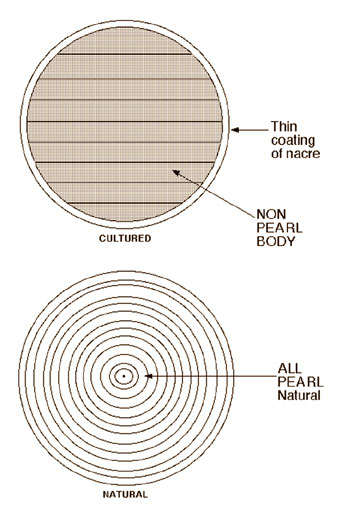 Think about your knowledge of pearls… Did you know that ‘cultured’ pearls (nucleated and non-nucleated or tissue nucleated cultured pearls) and imitation pearls can be distinguished from natural pearls by X-ray examination? Nucleated cultured pearls are often ‘pre-formed’ as they tend to follow the shape of the implanted shell bead nucleus. Once the pre-formed beads are inserted into the oyster, it secretes a few layers of nacre around the outside surface of the implant before it is removed after six months or more. When you X-ray a nucleated cultured ‘so-called’ pearl it will reveal a different structure to that of a natural pearl (solid center with no concentric growth rings, compared to a solid center with growth rings). Many nucleated cultured pearls used in the trade today are in fact mostly shell bead nuclei with very thin to thin nacreous coatings over them. A natural pearl however is solid nacre or 100% pearl. 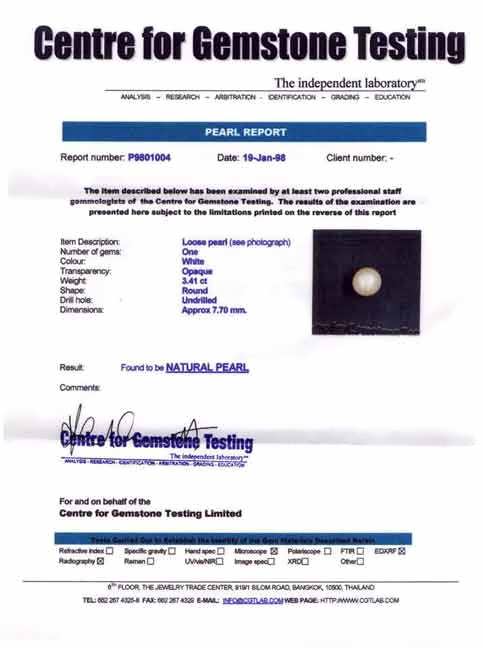 One should NEVER purchase a natural pearl without a bona-fide gemological X-ray certificate. Some reasons being that good quality natural pearls are real, valuable precious jewels (cultured-pearls are not), and only NATURAL real pearls, in “single divine unit” emit auspicious Moon energy (cultured pearls are near-powerless). Although a real pearl is made of “nacre” still nacre in not a pearl. There fore a thin coating of nacre is NOT considered a real pearl. Ruby is made of red corundum, yet a coating of red corundum on a brick does NOT make a ruby; cultured pearl is the same principle.

If you were to take a department store mannequin and cover the doll with a thin layer of human skin, would that make a human being? A cultured pearl is the same process (follows a similar process), i.e., taking a shell bead nucleus and inducing an oyster to cover it with nacre to ‘imitate’ the formation of a natural pearl. But thanks to X-ray examination we can now separate cultured pearls, non-nucleated cultured pearls or imitation pearls from their all-natural counterpart.

I hope this small article has opened the eyes of some readers for a greater appreciation of one of nature’s most perfectly blessed treasures, viz., REAL PEARLS, the sacred gem for the Moon (Chandra). Also known in Sanskrit as, “mukta-phala” or the fruit of liberation and “Shasi-ratna” or Gem of the Moon, fine natural pearls will always be treasured by real collectors and connoisseurs all over the globe. As it has always been.